It is with great sadness that Bulkley, Richardson and Gelinas, LLP announces the passing of longtime partner and valued friend, Bob Gelinas.

Bob joined the firm as an associate on June 1, 1957, more than sixty-five years ago, and became a named partner of the firm in 1972.

“Bob Gelinas was one of this firm’s most beloved partners and continued to be a mentor to many of us who still practice at the firm today,” laments Dan Finnegan, managing partner. “I can honestly say that I have never met anyone who enjoyed the practice of law more than Bob. He was still coming into the office on a regular basis well into his 80s, and I am sure he would have continued to practice another decade if he had been able to do so. Bob was a great lawyer and an even better person.”

Bob was a member of the firm’s Litigation Department and also worked with the Government Strategies, Health Law and Employment Law Practice Groups. His practice focused on resolving disputes through advice, litigation or alternative dispute resolution in such areas as health care, employment, land use, taxation and construction. Bob had long represented the major medical providers in western Massachusetts before various agencies and courts and he represented nearly all of the major educational institutions in the region regarding issues, including labor relations, construction, real estate, and professional and personal conduct.

For more than 25 years, Bob was selected by his peers for inclusion in The Best Lawyers in America® in the area of personal injury litigation (defendants).

Prior to commencing his practice of law in 1957, Bob graduated from Naval Officer Candidate School and served as a U.S. Naval Air Intelligence Officer.

An active member of his professional and local communities, Bob was an active member of the Hampden County Bar Association for more than 60 years, served as a trustee and chairman of the board of trustees of Holyoke Community College, president of the Chicopee Community Center, chairman of the United Way Professional Campaign Unit, and board member of Heritage Savings Bank. He was honored for his service by many civic organizations. 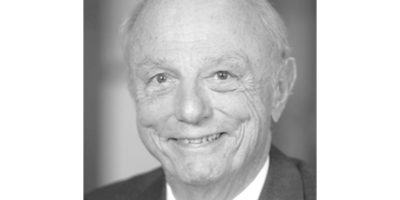